Just ask Roger Federer. In his last visit to Australia for the Open he commented on how laid-back the event seemed in comparison to other Grand Slams. Federer noted that each year the event is well-organised and everything seems to run smoothly.

Each January, Melbourne Park becomes Australia’s centre of gravity. Each year, pretty much every paper generates daily pictures of Federer, Djokovic and other tennis stars, whilst TV news reporters constantly swarm around the grounds. Australia is the smallest of the four slam nations by far, as well the most sport-obsessed, making the high level of its own tennis fixation unique. 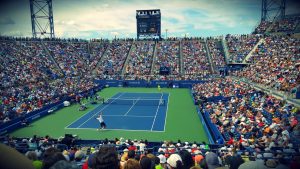 The completion of the new roof on Margaret Court Arena now means that this is the world’s only outdoor championship to possess retractable lids on all of its main courts. Given that some years the Open is severely affected by 40-plus temperatures, the roofs are useful in protecting players from searing heat as well as rain. In any event, the show will go on, and each singles match could potentially be held inside if required.

Every year at the Australian Open fans get really excited about tennis, they love to cheer and they love to get loud. Tennis apparel in Melbourne is always in abundance this time of year with fans doing their best to celebrate the game of tennis. The event is always livened up by numerous cheer squads, some encouraging Australians such as Nick Kyrgios and others barracking the game’s best. Regardless of who’s on the court, the roars of the crowd will always be heard.

Australians aren’t given to mincing their words. Whether it’s junior boys’ winner Luke Saville telling a live TV interview that winning felt a “s–load” better than losing, or 2013 master of ceremonies Sandy Gordon introducing runner-up Li Na with the words “She is battered, she is bruised and she is quite possibly buggered”, you can’t know what they’re going to say next. The results tend to be politically incorrect but all the more entertaining for it. Tournament doctor Tim Wood insisted that gamers should not complain about 40-plus temperatures since we evolved on the plains of Africa chasing antelope all day in the hot conditions.

It has sometimes been ransacked by hordes of skirmishing Serbs and Croats, who flip the plastic seats into missiles in their excitement, but for the majority of the time the leafy central plaza is a mellow place for picnicking and conversing: Henman Hill with better weather.

Given the Australian Open’s eccentric position, a mere few weeks into the new year, participants should not be affected by fatigue. The majority of the top players are coming off month-long training blocks which have sharpened their skills and put them in optimal physical form.

After two weeks without a significant tournament, the desire for another wave of fuzzy ball-wrangling is always powerful among the world’s sports fans. And the continuing debate about the balance of power — who’s hot, who’s not — also gains an additional frisson from the feeling of a new chapter opening. Due to its early slot, the Australian Open does more than any other slam to form the narrative of this season. Novak Djokovic has used it as his springboard for the past couple of decades, while Stan Wawrinka won his maiden slam here in 2014, then went on to bring a maiden Masters 1000 name and the Davis Cup as well.

Melbourne and all of its resident’s love hosting the Australian Open each year and those who don’t live in the city travel far and wide to get there and be a part of it. Tennis stores in Melbourne have their busiest period during the Open and many other hotels and restaurants also benefit from the masses of crowds who come to the city to join in on the action.

My 4WD Adventure Through The Victorian High Country

While taking an extended working holiday to Australia a friend of mine had his own 4WD up for sale with...