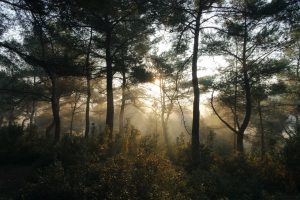 While taking an extended working holiday to Australia a friend of mine had his own 4WD up for sale with a couple mods and accessories like an ecb nudge bar already installed. Given it had always been a dream of mine, I jumped at the opportunity to purchase for me and my family a 1996 Land Rover.

‘She’ wanted a little work done to her to get the roadworthy, but after that was sorted I couldn’t wait to get her out onto the outback.

We’d decided that a roundabout visit to Melbourne with dirt streets, bog holes, ruts and steep drop offs was warranted. On the trip down we chose the Hume highway. It had been quite a lengthy trip particularly with a 6yr old and a 1 year old in the back; however, the multimedia installation of a DVD player appeared to keep them entertained.

During our trip we ventured to Wombat State Forest for the afternoon. It was enjoyable. Somewhat frightening sometimes and dusty but I had a blast and we travelled with 3 additional vehicles. The one thing that I shall remember about this trip would be the mud hole. You had to border the edge to gain access to the chicken trail. I expected my partner to crawl in as the other vehicles did, however he chose to ‘flaw it’ through the puddle and naturally; as 4wd bull bars tend to, it dug into the base of the puddle. In retrospect, while we did get through it, half the puddle ended up in the vehicle with us! My two little children couldn’t stop laughing!

At 10:30 in the morning on Thursday we began the journey back home. What experiences waited for us now on the journey? My car runs on gasoline in addition to gas but we did this trip all on gasoline cheap? What fun. We chose to take the scenic route home and we all had our hema newspaper map of the Victorian high country with us so we began our journey home through the Great Alpine Road.

I am not Certain just how far along the street we had been but we saw a lovely little flow off to both sides using a tiny bridge that led around to the visitor centre. We were planning to stop by, but there were some individuals there so we drove up a little to chuck a ‘u-ey’ (as Aussies say). Suddenly my eyes lit up a bit. ‘Hey honey… we’re on a dirt street, would you like to follow it for a bit,’ therefore we checked our map and it did not appear to go for too long and it brought us out into the Great Alpine road again.

Hubby left the choice up to me. So I said, ‘what the hell.’ The Trail was known as Collins street and was not that fun or a small detour, it was a 5hr trip that we weren’t ready for. We had drinks but not much, I had been unfamiliar with what I was doing leading me to be anxious and on edge.

Each 20m or so there was an obstruction such as a fallen tree to eliminate or move around or lift up, the trail ended up breaking up and then we drove down one which appeared to take forever only to be cut off with a massive fallen tree forcing us to turn around again. Steep drop offs that frighten the daylights out of me were common, especially whilst my kiddy’s were at the vehicle. Obviously, it was fun, however this was an unanticipated long detour and I have never been more grateful that we decided to install nappa leather car seats before we left.

Finally, away from the trail around 6pm, we then drove to another town to liven the atmosphere up and refuel, but everything was shut. Continuing on we had been down to our red light on the gasoline tank and we’d begun to ascend Mount Hotham. I despise hills especially if its dark and I did not even know that it was Mount Hotham so the experience was nerve racking. Ian (hubby) believed we would not even make it onto the mountain and by this stage the Rover was losing its go and beginning to cough and splutter. We kept moving.

I had been just like a stunned rabbit caught in headlights, I had been that stiff with fear I couldn’t let go of the door, all of the while viewing the red light on the gas in addition to listening to my husband tell me about the views on each side along with the sheer drop offs etc. On descending this mountain, we essentially coasted the 4wd down, engine running to maintain the brakes and steering on.

I Couldn’t see anything except those orange beacon items they place there rather than guard rails. I never knew I could get that fearful I was nearly in tears. We eventually made it into the town after MT Hotham just to realize the servo was closed and they did not even have LPG therefore we needed to shore my poor rover yet another 20 odd kilometers to Bright.

They had a servo that had LPG but again being so late at night it was closed. We pulled up and that’s where we slept for the evening. The following morning at 6:30am we gassed up and headed home

Finally arriving back in Brisbane, while terrifying at times, I loved the trip. We took the good and bad in our stride and the kids couldn’t have been happier. If there’s one thing I’d do different next time, it’s take a jerry of gas… or you know research my dirt tracks.

If he's not Performing 200 Miles around the racetrack, NASCAR winner driver Kurt Busch is ingesting a desire besides speed:...